Welcome back to Member Monday!  Today we feature a piece by Writers Forum member Deborah Gilson.

One way or another, I was going to Europe. Entering Kurt, my fiancé’, and myself in the 1996 London Marathon, I told my friends I was finally going abroad.

The only trouble with my plan was I AM NOT A RUNNER. Never have been, probably never will be. I began my training by walking around my block a couple times after work. B-O-R-I-N-G. I trained for a month before Kurt and I took flight to Europe. I mean, how hard can it be running 26.4 miles?

After landing in London, we went straight to the marathon headquarters and obtained our runner’s packet. The day arrived for the big race. Carrying a sack of essentials while I ran, it wasn’t long before I was throwing these items off my fanny pack. The heat was relentless, the millions of other runners had no idea of personal space and my old “running” shoes began to hurt my feet before the one-mile marker. Still, I continued jogging until I thought I would faint from exhaustion.

Seeing the back of a friendly-looking man’s head, I struck up a conversation with Joe, from England. He was running for the National Meningitis Trust, in an effort to create awareness of this disease. I told him I’d never heard of it. Speaking of hearing, the disease took the hearing from one of his ears. Having to repeat myself often to Joe, I began running on the side of his good ear.

Joe, determined to raise awareness for his cause, continued running while I stopped cold at the 10-mile marker. It was there I met Vicki, from Wales, who was also taking a running break. I told Vicki I’d heard of Wales as I followed whatever Princess Diana was doing. “Where in the heck is Wales anyway?” I asked Vicki. Thinking I was joking, she gave me a gentle push. Puzzled, I continued walking with Vicki, my new best friend.

Seven hours passed and I was still a participant in the London Marathon. At least I still had Vicki by my side. We learned each other’s entire lives during our walk. When we would see television cameras, Vicki would jump up and down, waving to her family back home in Wales, who were watching for glimpses of her.

Kurt, my fiancé’, planned completing the marathon in a little over four hours. It occurred to me he finished three hours ago. Positive he was back at the hotel resting after a hot shower, with perfect-feeling feet, body, mind, heart and soul, I nearly collapsed.

At long last, I saw the finish line. Grabbing Vicki’s arm for reassurance, I pointed to the only remaining people involved in the race: the volunteers. A vicar (priest) walked in between us, holding each of our arms in his. He walked us over the finish line as the timer displayed: 7: 15: 30. Yes folks, that’s right. It took Vicki and me a mere 7 hours, 15 minutes and 30 seconds to complete the London Marathon.

Vicki taught me I’d better learn geography, humor under duress, perseverance, the meaning of the word vicar and confirmed it’s possible to instantly feel I’ve known someone all my life. Her parting words to me were, “Remember, Debbie, it’s not how fast you do the race that counts. It’s the fact you finished what you started.” 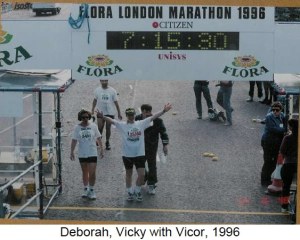 A Note from the Webmaster: If you’re a Writers Forum member in good standing and would like to be featured on Member Monday, please send your submission to writersforumwebmaster@gmail.com. Submissions should be 75-750 words, appropriate for all ages and error free. Please include a short bio, a headshot and any related links. The author retains all rights and gives permission to Writers Forum to publish their submission on the website and/or in the newsletter. Thank you!

One thought on “Member Monday: London Calling by Deborah Gilson”