When last we heard from our stalwart NaNoWriMo adventurers, their November writing marathon had  just begun. Did they finish?

You can see how I fared from the Dashboard at my NaNoWriMo account. 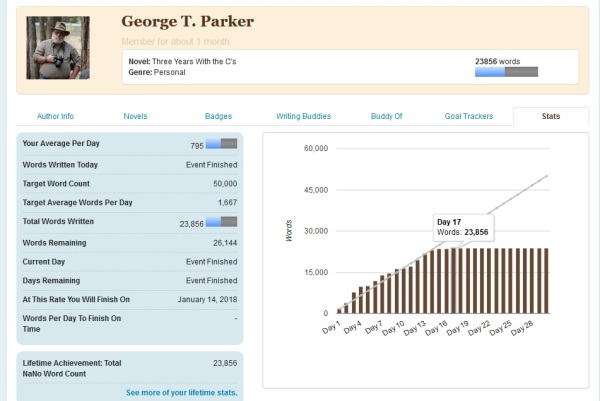 I started off strong. I was even well ahead of schedule by Day 3. I fell a little behind on Day 10, but caught up on Day 11.

Then I crashed into a wall.

I had an opportunity to cover the California Conservation Corps regional flood training for my CCC blog. I lost a couple of days of NaNoWriMo writing, but I already arranged to take the Monday and Tuesday after Thanksgiving off just in case I needed some catch-up time.

It didn’t work out that smoothly. I needed a few days to workout some technical issues that I had concerning the blog story. Then the stress from trying to get that story posted before Thanksgiving drained any energy I had for NaNoWriMo. Just before Thanksgiving, my wife Patsy asked how far behind I had fallen.

So…I did not hit the goal of 50,000 words for the month. However, I do have 26,370 words written that I did not have on October 31, so I’m counting this experience as a win! (By the time I got back to my NaNoWriMo account, NaNoWriMo was closed and I couldn’t add any more to the word count. I did write for two more days after my last official update, so I actually reached 26,370 words and not the 23,856 totaled on the Dashboard.)

I filled over one-and-a-half Moleskine notebooks. This was where I ended. 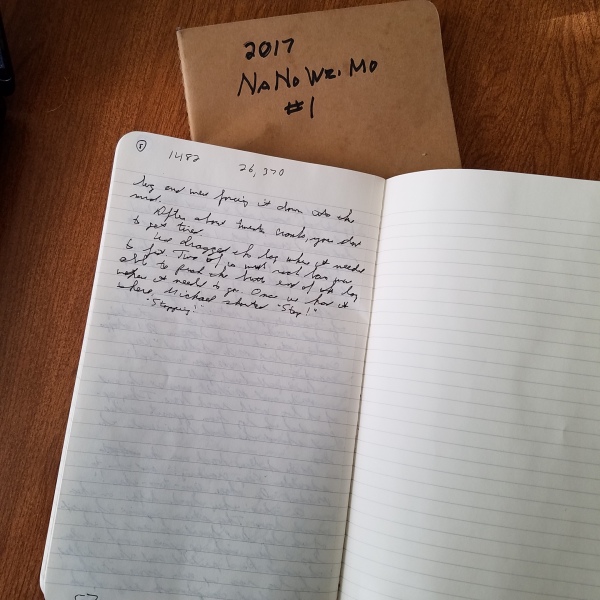 I did learn something interesting about Redding participation in NaNoWriMo. 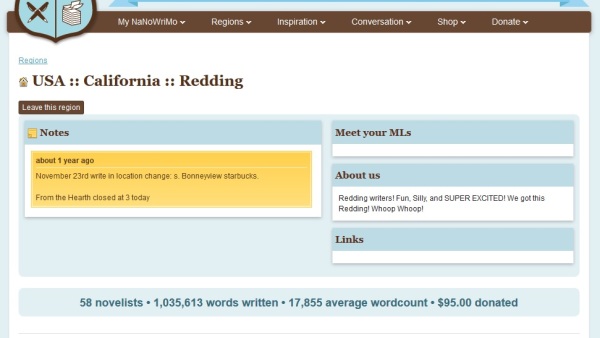 Apparently, fifty-eight novelists who consider themselves to be in the Redding area officially participated in the 2017 NaNoWriMo event. They wrote a combined 1,035,613 words in November. 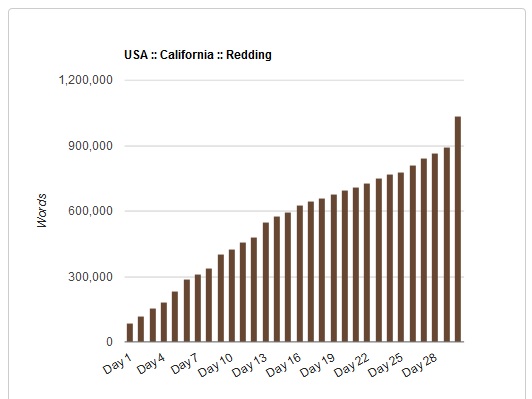 I know that WF members Carolyn Faubel and Vickie Linnet participated. We heard from Carolyn on Friday. Vickie wrote consistently for two weeks, and then had a chance to reconnect with a family member. Two weeks seems to be the common point for hitting The Wall, doesn’t it?

I don’t know who those other writers were, but somebody made a mad dash on November 30 to push that final number over the one million mark. Well done, Redding!

I can’t wait until next year. Oh, yeah…I plan to run this marathon again!

We accounted for three of the fifty-eight Redding area writers officially entered at the NaNoWriMo website. That leaves fifty-five writers unaccounted for. Would any other Redding writers care to share their 2017 NaNoWriMo experiences?

One thought on “NaNoWriMo Wrap”