Today’s Member Monday piece was written by George Parker, and read to the Writers Forum at the June Readaround. 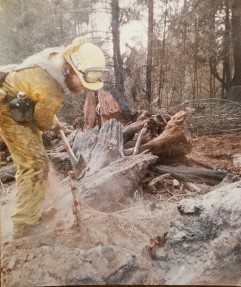 That first afternoon we completed a patrol around our assigned section of the entire fire perimeter. The fire line was a literal line scratched onto the forest floor through the duff down to the mineral soil. ‘Duff’ is leaf litter, or any flammable organic debris on the forest floor. It’s the thick carpet of pine needles, sticks, and cones that accumulate on the forest floor. It’s critical to get this line down to dirt and rock…stuff that will not burn, or else the fire will just burn on through the line and keep burning. Everything outside of the fire line is green…trees, grass, brush. Most everything inside the line is black. ‘Most everything’ because not everything in a ‘burn area’ necessarily burns. Wisps of smoke rose from the ground and from charred trees everywhere inside the line. We attacked the more significant ones right away.  We dug into the dirt with the grubbing edge of a Pulaski to expose and cool off the hot material. We broke up smoldering pieces of wood and duff to dissipate the heat and cool them down. Flames licked from the ground up into bushes that were not yet fully consumed. One of us would go over and root out the burning material and spread it out as well. One of us carrying a piss pump would wet down the flames and hot smoldering material.

We did not spend too much time right now on any particular area. Stretch’s main job for us that afternoon was to see the entire terrain we would be covering during daylight hours. We hiked our assigned section of the perimeter several times. Stretch pointed out to us things we would be addressing the next day, such as the few trees that needed to be felled back into the burn area. These trees needed to be dropped because if they caught fire and fell across the fire line, the fire would escape and take off again. The Hot Shot crew had tackled most of those trees, but there were still a few for us to fall.

The two Yosemite fire fighter ‘grunts’ had a hard time keeping up with us as we moved around the perimeter. Listening to Stretch talk to them, it soon was obvious that this was their first season as fire fighters. Whether they would be back for a second season was open for debate right now. We Corpies would be right behind Stretch as he legged his way up and down the steep grades. This was the part of firefighting that we already knew all about! Every so often one of his guys could be heard from way behind “Stretch! Wait up!” Stretch started getting irritated with them. “Geez! C’mon! These guys are keeping up with me just fine, and they’re not even fire fighters! Get with it!” And then he would not slow down.

By sundown we had made several trips back and forth across our perimeter. No open flames remained…at this time. Stretch had a plan for the next day. We went back to our campsite for dinner. Dinner on these fires was MREs. Army rations. MRE stands for Meal Ready to Eat. Each meal comes in a big heavy-gauge plastic bag. Each bag contains a main course, a side dish, dessert, instant coffee, plastic utensils, toilet paper, and chewing gum. Each part was in its own little plastic pouch. The concept was simple. Tear the top off the pouch, add hot water, let it sit several minutes, and there you had it. An instant dinner. That first MRE went down pretty well. We had worked up quite an appetite.

We sat around talking for a while, and then everybody turned in for the night, two to a sleeping pit on the uphill side of a tree. As I crawled into my sleeping bag next to Glen, I took my boots off and set them carefully right next to my bag. I fell asleep to the sight of stars and the smell of smoke.