Welcome back to Member Monday.  It’s a delight to feature member Lois Bauer-Kay.  Lois has been a member of Writers Forum since 1985.  She served as Writers Forum Secretary and Writers Forum President.  Lois has published six books since the year 2000.  She writes fictional novels based on true crimes.  Click here to read the first 5 chapters of her latest book Death Ride and while you’re there, go ahead and buy the Kindle edition.  It’s a steal at $2.99.

An Excerpt from Death Ride 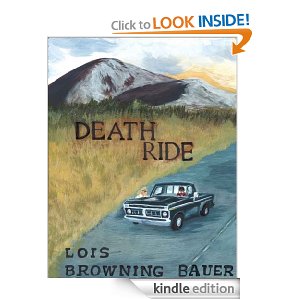 “We need help,” Carolyn Quillen shouted to the 911 operator. “Our daughter, Sara is missing!”
At sunset, Sara Quillen had dressed in her white jogging suit telling her parents in a shaky voice, “I’ve got a problem and I’m going for a run to ‘clear my head.’ I’ll be back in an hour.”
Carolyn glanced at her husband, Jerry, and forced a smile.  Looking directly at Sara, she said, “When you come home we’ll talk.  Your dad and I will help you with your problems.  Don’t forget your cell phone and flashlight in case the sun disappears before you get back.  Oh…and don’t forget to call us if you need a ride.”
When Sara didn’t return in three hours, her parents began to worry.  Carolyn dialed her daughter’s cell phone.  No reply.  Why in the hell isn’t our girl answering?”  Five minutes later she frantically reached for the phone and dialed again.  The silence was deafening…
Quillen hopped into his black Chevy truck and cruised through the entire subdivision finding several teenagers playing baseball in the street.  He pulled Sara’s class picture from his wallet and shoved it into one boy’s hand. “Have you seen this girl? She was jogging in white sweats.”
The teenager squinted as the street light shone on the picture.  He said, “I haven’t but ‘Man’ she’s a real knockout! I’d know it if I’d ever seen her, but maybe some of the others have.  I’ll pass the picture around.”  As he handed it to each person, they shook their heads ‘no.’
An hour later Jerry Quillen returned home.  Pale and exhausted he said, “No sign of her.”
Carolyn’s face turned white as she screamed, “Where the hell is Sara?”

A Note from the Webmaster: If you’re a Writers Forum member in good standing and would like to be featured on Member Monday, please send your submission to writersforumwebmaster@gmail.com. Submissions should be 75-750 words, appropriate for all ages and error free. Please include a short bio, a headshot and any related links. The author retains all rights and gives permission to Writers Forum to publish their submission on the website and/or in the newsletter. Thank you!

2 thoughts on “Member Monday: An Excerpt from Death Ride by Lois Bauer-Kay”