Our June meeting will showcase Writers Forum members by offering the opportunity to read up to 5 minutes from their original works.  Upon arrival at the meeting, members can sign in and read on a first come-first-read basis.  Limited spots for nonmembers may also be available. Critiques of the readings by members of the audience are optional and will be provided only upon request.

So, brave writers, it’s time to get out a piece that makes your heart sing, your friends giggle, or that piece that just won’t let you go.  Give yourself a few practice sessions in the mirror to help quell those nerves and ensure that your reading fits in the 5 minute time limit.  Then come and share your work and enjoy being in the presence of other daring writers as they share with you.

We look forward to seeing you at our June meeting!

*Monthly meetings are held on the second Saturday of the month from 10:30 am-12:30 pm in at All Saints Episcopal Church in the Memorial Hall.  Doors open at 10:00am and the meeting begins promptly at 10:30am.  All Saints Episcopal Church is located at 2150 Benton Drive, Redding, CA.  For more details about monthly featured programs and other Writers Forum events, please visit our Calendar Page.  There are not monthly meetings in July or August.

Welcome  back to Member Monday.  Today it’s my pleasure to share a piece by poet and Writers Forum member Donna Rae-Standley.

I started my prose writing career when I was in the third grade. I loved reading about American Indians and wrote a ditty entitled “Once there was an Indian Maid.”  I haven’t stopped writing or being inspired since.  ‘Alabaster Glory’ was thus inspired when I gazed upon Mt. Shasta’s snow clad majesty on a cold, clear morning.  ‘Alabaster Glory’ will be published in the Shasta Historical Society’s 2012 publication, The Covered Wagon

Oh mountain so high and meadow so low
The breath of God embraces you
So towering you stand in your milky alabaster glory
Majestically gilded in sparkling lights of colored crystals
Dancing nymphs and gnomes serenade your beauty
As wispy veils of iridescent gossamer foam whirl round and round
Legends abound of your luminescence resonating upwards
Straining to kiss the hand and face of God
Oh ye powerful entity of ageless beauty
Look down upon we mortal souls of the land
Guard us with your regal posturing and magnificence
Let our souls feel the presence of your glory and strength
Grant us the everlasting grandeur of your being
And the tranquility resonating from your wisdom and inner peace
A Note from the Webmaster: Writers Forum has the author’s permission to publish this work. The author retains full copyright ownership and protection. This work may not be reproduced or used in any way without the permission of the author.  If you’re a member in good standing, please consider submitting a piece of your work to share.  Essays, poems, songs, articles and any other stand alone pieces are welcome.  To submit your piece, please e-mail it to webmaster, Alicia McCauley, at writersforumwebmaster@gmail.com.   Members featured here are guests in our Writers Forum house.  Treat them as such in the comments section and enjoy this beautiful thing we call writing.

Welcome back to Member Monday!  Today Larry Watters, President of Writers Forum, shares a piece taken from his own backyard.

Author’s Note: We were renters of a place that had a koi pond with twin waterfalls, 7 koi and 11 gold fish. And raccoons feasted. The owner hired a trapper who’d catch one or two, then nights would pass. Thinking we’d had the last, we stopped setting the traps, and a week later another koi would disappear. The trapper said they were the biggest raccoons he’d seen. Finally the owner threw in the towel.

Rocky and the Mystery of the Boxes at the Pond

Rocky waddled up to the pond, listening to the soft splashing of the twin waterfalls. There were no more of the big fish; in the past, they had been so plentiful all could not fit under the ledges. This stop also had a food box occasionally, but no more. The boxes were far different from the food bowls that his clan used many moons ago.

Rocky remembered when more than twenty of his clan would gather on a deck by the river, feasting on dry crunchy protein-laced kibbles. Occasionally there would be piles of softer food, but the older, more senior, clan members would claim first dibs. Moon in, moon out, the deck was a steady, reliable source of food, no matter what the season. His elders told tales of earlier famines during those periods when the big orange orb that was overhead during their sleep would begin rising later and be lower in the blue, just before the leaves would start drying and falling to the ground. But this horn of plenty seemed to always be there.

Then one dark it wasn’t. The clan was not concerned. There had been other times that it would not be there for a couple of darks, forcing them into small groups to seek food elsewhere. Each dark it was their wont to forage, eat, and when sated, return to their sleep-trees.

But this time it never returned. Roaming and foraging in small groups of three to five, the clan survived. One group told of a magic pond that had fat, colorful, and lazy fish. And for those that didn’t want fish that dark, the ground nearby held fat grubs that could be had with very little digging. They told of how a single fish could feed them. There were also floating toys that they could play with, even out of the water, as long as you returned them. Only once had they not returned one. The group told others that they could not come, keeping its location a secret. But then Uncle Frank didn’t return one dark.

A mysterious food box had showed up. With an enticing aroma that reminded him of the food on the deck of the past, Frank had squeezed into one of the oddly configured boxes; only one opening with a lid. The lid had dropped with a loud clunk, trapping Frank. The others had waited for him to come out, but they tired of waiting, so they left.

The next night two boxes were there, but Frank was not. But the food smelled just as good as it had the dark before. So his other uncle, Sid, had gone in. Again there was a loud clunk and Sid was trapped. An older cousin thought it couldn’t happen twice, declaring it was safe for him, and went into the other. CLUNK! The group decided it was time to give up that food source, sending only an occasional scout.

Cousin Scout, for that was his name, came back one rising with the news that the boxes were not there anymore, and the big fish still were, having gorged himself on one of them. So another small group with a new member set out the next dark. But the boxes had returned. Ignoring the warnings from the others, and thinking he was smarter than any old box, cousin Dilbert succumbed to the temptation. CLUNK! Scattering, the group left the pond once again. Scout volunteered to check it out every few darks.

After many darks, Scout reported that the boxes were gone; again. Only one big fish remained after Scout had fed, but smaller ones were as plentiful as they had been. Returning the next dark to feed, the newly reformed group, that included Rocky this time, was surprised once more to find that a single box had returned. Thinking that Scout had tricked them (after all, there was a power struggle for clan leader), they forced him into the sole box. CLUNK! The group decided that Scout had got his just desserts for tricking them, and vowed to never again visit the pond.

But one dark, Rocky decided to return, curious more than anything. Seeing no boxes, he edged up to the pond, slipped quietly into it, and caught the sole remaining big fish. Returning to the clan, he made no mention of it, keeping it to himself, superstitiously thinking that if he told the clan, the mysterious boxes would return.

The next dark, he returned, and the boxes were not back; nor the next night, nor the next. Rocky was happy to have the smaller fish and the grubs all to himself 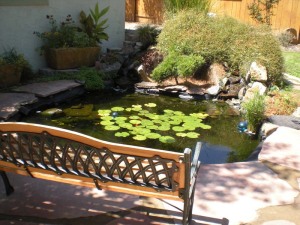 The pond became a dining spot for Rocky's tribe, but they were so rude they destroyed the plants.

A Note from the Webmaster: Writers Forum has the author’s permission to publish this work. The author retains full copyright ownership and protection. This work may not be reproduced or used in any way without the permission of the author.  If you’re a member in good standing, please consider submitting a piece of your work to share.  Essays, poems, songs, articles and any other stand alone pieces are welcome.  To submit your piece, please e-mail it to webmaster, Alicia McCauley, at writersforumwebmaster@gmail.com.   Members featured here are guests in our Writers Forum house.  Treat them as such in the comments section and enjoy this beautiful thing we call writing. 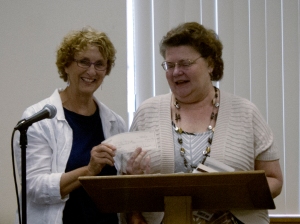 Terry Shames, of the Sisters in Crime NorCal Chapter, presents a grant check of $1000 to Janet Albright of the Shasta College Library. 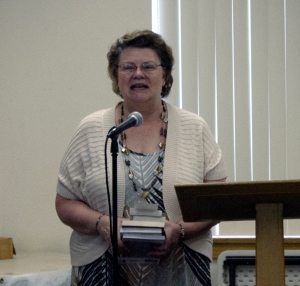 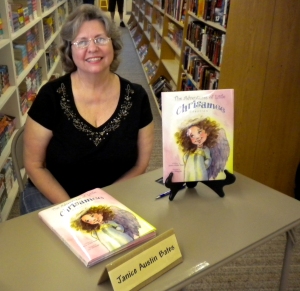 Janice Austin Bates at All About Books

Les Morse signs books at All About Books.

If you’re a writer and would like to be a featured author during the Second Saturday Art Night, please contact Richard Lucas at All About Books.

See you soon at our June Writers Forum meeting!

Welcome  back to Member Monday.  Today it’s my pleasure to share a piece by the lovely and talented Writers Forum member Katie Watters.

A Note from the Webmaster: Writers Forum has the author’s permission to publish this work. The author retains full copyright ownership and protection. This work may not be reproduced or used in any way without the permission of the author.  If you’re a member in good standing, please consider submitting a piece of your work to share.  Essays, poems, songs, articles and any other stand alone pieces are welcome.  To submit your piece, please e-mail it to webmaster, Alicia McCauley, at writersforumwebmaster@gmail.com.   Members featured here are guests in our Writers Forum house.  Treat them as such in the comments section and enjoy this beautiful thing we call writing.